Influence of the overall mileage of vehicles

The mileage of a car over its entire life cycle has a major influence on the life cycle assessment, especially if it is an electric vehicles. A long vehicle life means that the benefits of these vehicles last well into the usage phase and compensate for the environmental effects of battery production.

We usually base the comparison of the drive systems on the same mileage during the vehicle life. In this case, electric vehicles with a real range of 100 km (BEV100) are more or less equal in terms of their climate footprint to efficient diesel vehicles and are around 20% better than similar petrol vehicles (grey bar in the illustration).

However, in practice there are systematic differences between the drive systems in terms of mileage. For instance, diesel vehicles are used for applications with higher mileage as they are more expensive that petrol vehicles to buy but have lower operating costs. This correlation is also expected with electric vehicles. Today, they are linked with significantly higher purchasing costs than conventional vehicles but the operating costs (taxes, energy costs) can be significantly lower. From a total cost perspective, purchasing an electric vehicle therefore makes sense in the case of a high lifetime mileage. 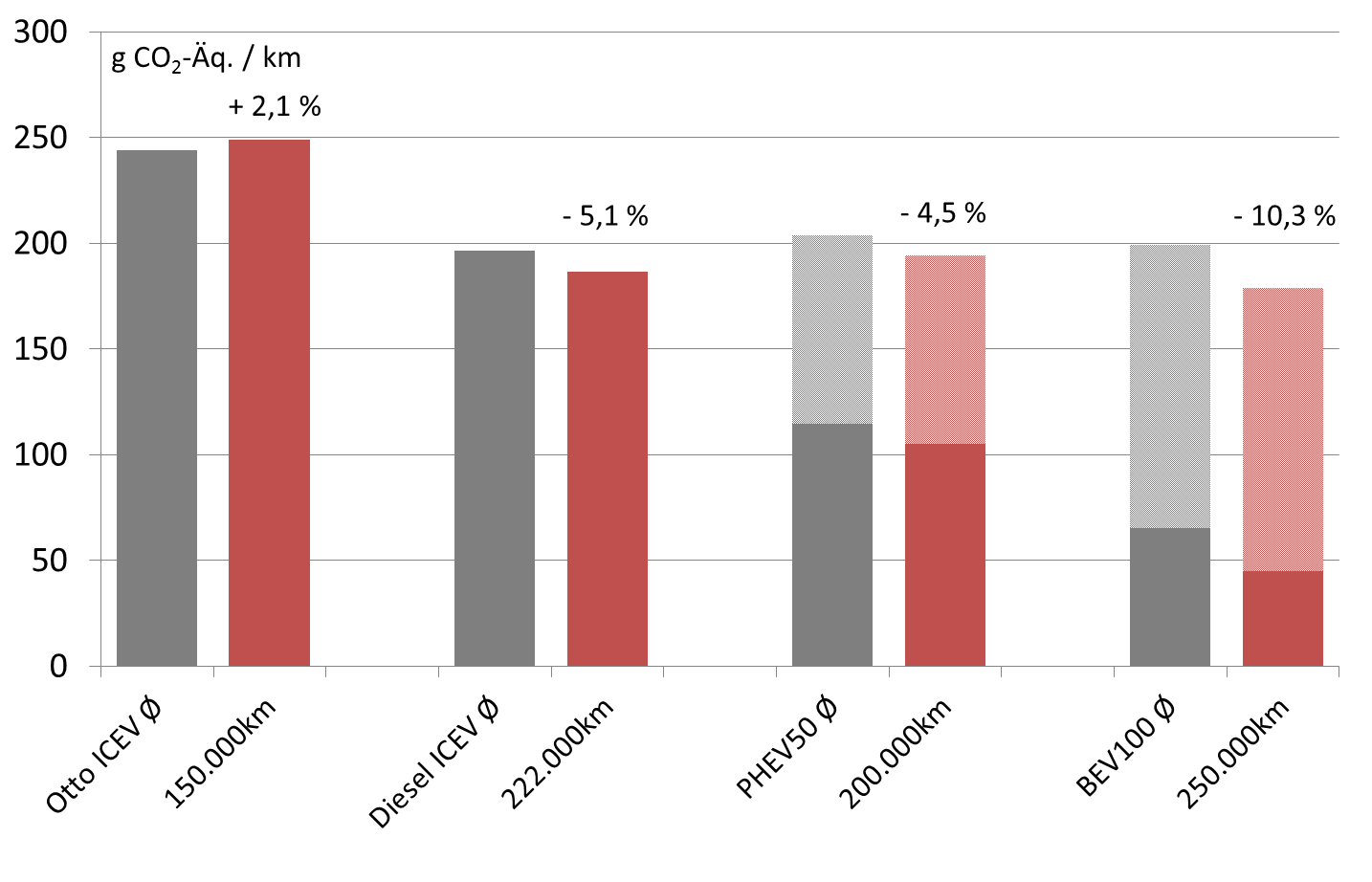 The climate impact of the vehicle concept with average mileage (168,000 km, grey bar) and for the expected mileage for each vehicle type (red bar). The light-coloured bar sections give the additional emissions compared to fully electric operation if fuelled using the German power mix. (IFEU 2017)

With the red bar on the illustration, we have therefore assumed the typical mileages for petrol and diesel vehicles and have based the values for electric vehicles (PHEV50 and BEV100) on those that seem realistic according to current market studies. The mileage-related footprint therefore improves, in particular against the petrol car and, in the case of the BEV100, also marginally by comparison with the diesel car.

It must be noted that significantly lower mileages are possible for electric vehicles, primarily in the initial phase of market launch, because a significant number of electric vehicles are purchased in addition to a previously purchased conventional vehicle and are only used in a limited way. However, with increasing market penetration it can be expected that economic criteria will become more important when choosing a vehicle and electric vehicles will become a viable option, primarily for intensive usage profiles (e.g. company fleets, car sharing).

Use our online tool to see how the carbon footprint of the various powertrains develops during a typical vehicle lifespan.