Influence of the technology used for vehicle charging

Contactless charging increases the greenhouse gas emissions of a compact class electric vehicle over its lifetime by around 5 tonnes, primarily due to the lower transfer efficiency. The benefits are in the areas of safety and convenience.

The charging process for modern electric vehicles usually involves an electricity cable and a plug. However, this leads to safety problems. For instance, the VDI states that trailing cables can cause trips and falls, while charging stations in public places present an easy target for vandalism and sabotage. Wireless charging (also known as “contactless” or “inductive” charging) increases safety and also operator convenience. Furthermore, the battery tends to be connected to the mains for a longer period and can be charged in a more protective way. In future, electric vehicles could thus make a more relevant contribution to the integration of fluctuating renewable energies.

On the other hand, there is a greater environmental impact from the charging infrastructure (both in the vehicle and at the charging site), from the higher vehicle weight, and losses through contactless energy transfer. These effects have been quantified approximately as part of the UMBReLA project, using data from the research projects.

It has been shown that wireless charging is associated with other pertinent environmental effects, which are due primarily to the lower efficiency of the energy transfer. Today, a total of almost 5 tonnes of additional greenhouse gas emissions are generated through wireless charging over the vehicle’s lifespan. The greatest proportion of this additional burden is due to the lower charging efficiency when based on an assumed overall charging efficiency of 75% (compared to 90% for charging with a cable). There is the prospect of this additional burden being reduced to 1.7t CO2 equivalents by 2030. 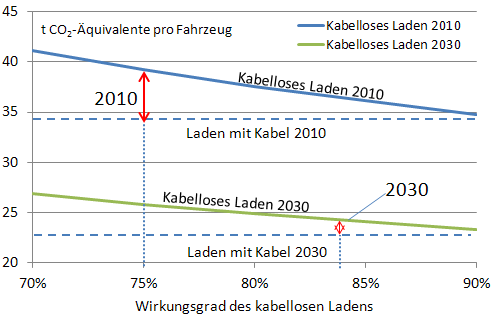 At present, these additional emissions are barely offset by charging the battery more gently, for instance, as they exceed the total greenhouse gas emissions associated with battery production (assumed battery capacity: 24 kWh). The integration of surplus wind power also barely makes this a feasible option as the proportion of wind energy that cannot be taken up by the grid is minimal (according to an Ecofys study, only around 0.2% of all the wind power generated in 2009 failed to make it to the grid).

However, the results depend to a large extent on the assumed transfer efficiency, as the sensitivity observation in the illustration shows. A more thorough analysis must consider whether the benefits of wireless charging, such as the increases in safety and convenience, lead to a quicker or more comprehensive introduction of electric mobility and therefore to a positive overall environmental effect.